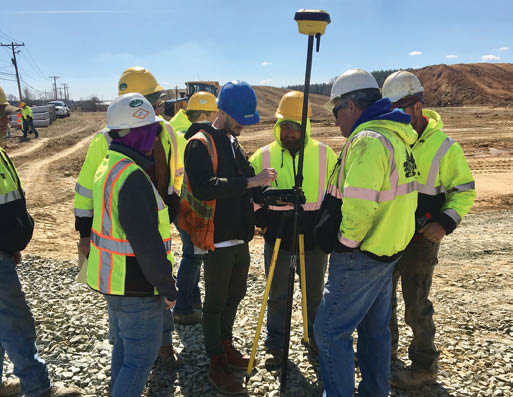 New Jersey's most famous son once wrote that he was born to run, but you might say one of the Garden State's slightly less well-known sons was born to build. Brendan Binder is the president and founder of Binder Equipment Technology, a Middlesex, N.J.-based company that supplies Leica Geosystems machine controls to a number of construction firms across the United States as well as a full range of support services. Binder, along with his wife and company CEO Krissy, launched the independently-owned company in January of this year. He's hardly a newcomer to the heavy construction equipment industry, though. Prior to starting his own business, he was involved for many years in Binder Machinery Co., the company founded by his grandfather in South Plainsfield, N.J., in 1957 that was acquired by Komatsu Ltd. in 2016. Binder says the lessons he learned working for the family-owned enterprise over the years continue to have a profound impact on the way he does business. "Our focus was always on service and support for our customers and that's a philosophy we've carried forward into Binder Equipment Technology and something we take very seriously, which I think is a differentiator for us in the technology products distribution business," he said. "I keenly understand the needs of contractors and the significant need of uptime and the cost of downtime that contractors can incur as it relates to construction equipment." Binder knew soon after his family's business was sold that he wanted to start his own company. He also knew that he wanted to go in a slightly different direction, with a focus on machine automation and the growth opportunities that are available in the technology sector. In March 2017 he attended CONEXPO-CON/AGG, North America's largest construction trade show, to explore potential partnerships for his new business. The very first exhibit he visited at CONEXPO was Leica Geosystems and signed a partnership agreement with the international manufacturer a short time later. "I knew that Leica had a very strong reputation in machine automation and other precision products that they manufacture. I just knew that was a company that we wanted to partner with," he said. Binder Equipment Technology offers a range of Leica Geosystems products for a variety of heavy construction projects, all with a focus on automation. That includes machine-controlled systems for bulldozers, excavators, graders and various other pieces of equipment. One of the company's most popular offerings is the Leica iCON site construction software system that is geared specifically for the piling industry. As part of the system, a series of sensors are mounted on a machine's chassis and lead vertical system and are constantly determining where the lead is in relation to the machine body using a sophisticated GPS unit. Shawn Dahl, Binder's technology solutions manager, says the Leica system is unique in that it allows the machine operator to do the work of several people. "Instead of having to rely on a survey to manually lay out the fields, the operator is able to navigate the machine to the exact geodetic position of that designated pile location without having a surveyor in the field," he said. "The machine is also able to [assess] where the pile is put in the ground and to gain information about how that pile was put into the ground. If it's a soil mixing situation, we're also able to extract data about the soil mixing [and] the depth that was achieved by that pile." Binder Equipment Technology has already supplied the system to a number of larger civil contractors in the Eastern U.S. including New Jersey, Pennsylvania, Delaware, Maryland and New York State, including New York City and Long Island. The largest project the company has been involved with to date is 50 Hudson Yards in New York City. When complete in 2022, it will be the city's fourth largest commercial office tower at 985 feet tall with 2.9 million square feet of space. Despite its involvement in several big-scale projects, Binder says his company plans to stick with the formula that made his grandfather's business so successful. A major component of that strategy is to continue providing education and training to clients and their employees on all products Binder sells. "Education and training is key because when it comes to technology products, contractors who aren't already utilizing machine automation tend to shy away from it because of concerns about training and education for their employees," he said.  "That's why we are very focused on ensuring that our customers' field support personnel are well educated and trained on the products that we sell and also have a direct line of support when they have questions they need answered." One of the first decisions Binder made after launching his company was to join PDCA. It was in keeping with his family's philosophy of helping the organizations that help them. "We've always felt it was important to have membership in industry organizations and associations, be involved in various committees and attend marketing functions because we understand the work associations do on our behalf," Binder said. "We also want to make that outreach to the pile driving market and really build our business by partnering with pile driving contractors throughout America who are looking to explore and implement machine automation into their organizations." Although Binder Equipment Technology is not yet a huge player in the industry, the company's president says it is actively growing and plans to add more people in the near future.