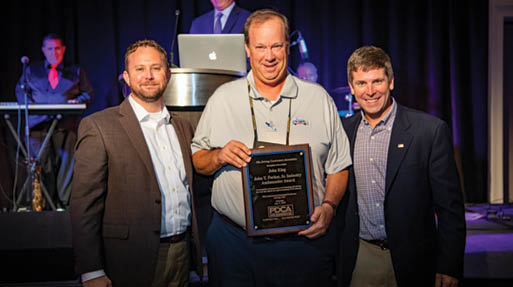 John T. Parker, Jr. of Parker Marine Contracting in Charleston, S.C., was, by the standards of anyone who knew him, an amazing person. Parker passed away at the age of 50 in January 2015. Parker was an active member of the pile driving community for nearly three decades and his passing greatly affected members of the industry, especially in the South Carolina region. To honor his memory, PDCA created the John T. Parker, Jr. Industry Ambassador Award for a person who positively impacts the driven pile community through their own passion and promotion of driven piles. At the PDCA 22nd Annual International Conference and Expo, the John T. Parker, Jr. Industry Ambassador Award was bestowed on John King of Pile Drivers, Inc., to resounding applause. King is a well-known face at various PDCA events and an exuberant proponent of the driven pile. He was also a close personal friend of Parker's and was touched to win this award. "I can't wait to show [John Parker's] wife," said King. "John Parker was a once-in-a-lifetime guy. He never met an enemy; he never said a bad word about anybody." King highlights how much Parker cared for the employees of Parker Marine Contracting to emphasize the type of person he was. "I've never met anyone who loved his employees more than he did," said King. "John could tell you the names of all of his employees' wives and children, and even knew where those children went to school. He knew so much about each individual employee. He was just a great ambassador for Parker Marine." As much as Parker was an ambassador for his company, King has been an ambassador for the driven pile industry at large. He is a past-president of PDCA, the current president of the PDCA of South Carolina Chapter and an active member of several PDCA committees. For King, it all comes down to believing in the driven pile. "I believe it's the best product on the market," said King. "Driven piles have very few flaws. People think we vibrate, but we don't. People say we're noisy, but we've worked on that with modern equipment. I'm always promoting piles. I think it's the best product for deep foundations, especially in [the South Carolina] market." King is a proud supporter of the driven pile and of PDCA and commends the good work of his fellow members. "There are so many members who deserve awards like this, but we'd be up there giving out awards for four hours," he said. "I couldn't be happier to see John receive the John T. Parker, Jr. Industry Ambassador Award," said Jason Moore of Palmetto Pile Driving, Inc. in Charleston and the current PDCA vice president. "If it's possible to support the structure on a driven pile, John's going to ask the question. John believes in his product and he believes in the mission of PDCA. And John is going to make sure that you're aware of his product and PDCA to the benefit of all in the driven pile industry. All he asks is that we do the same. I can think of no stronger advocate for the driven pile!" King offers advice to other PDCA members to support PDCA's cause: "Be dedicated to what you do and promote driven piles. And not even necessarily promote it, but don't hurt it. Don't go out there and try to make a quick buck and do it all."