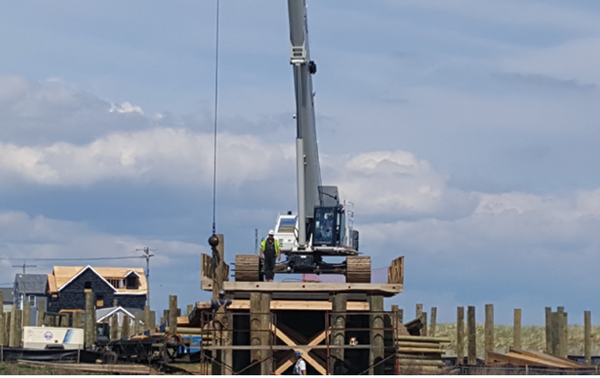 Silver Sands State Park is located on the Long Island Sound in Milford, Conn. During low tide, visitors can walk across to Charles Island, famous for being the site where Captain Kidd supposedly buried his treasure after he visited the island in 1699, before traveling to Boston where he was captured and later hanged. The island connects to shore via a tombolo (sand bar) at low tide. The park is an area of approximately 300 acres of beach, sand dunes, marsh, woods and the 14-acre bird sanctuary of Charles Island. The State of Connecticut acquired Silver Sands after hurricane Diane came through in 1955, destroying 75 homes in the area. Today, the park is used for picnicking, saltwater activities, field sports, nature programs and more.  Blakeslee Arpaia Chapman, Inc. (BAC) was contracted by the Connecticut State DOT to provide the foundation work for the park's phase 1B improvements. The improvements consisted of the installation of raised, pile supported bathhouse and concession area, several handicap accessible ramps to and from parking areas, boardwalks along the beach and a walkway across wetlands connecting to an existing boardwalk. Challenges  Wildlife  The project included many obstacles. The first of which was the sensitivity to the indigenous species and the need to minimize any impact on them. In late March, Connecticut beaches become the nesting ground for piping plovers, a small, sand-colored shorebird. Piping plovers are on both federal and state lists of threatened species. These migratory birds don't make nests, but rather use small depressions in the sand as their place to roost and incubate their eggs.  In order to minimize any disturbance to the birds, it was determined all pile driving activities within 160 feet of their breeding ground (the beach) needed to be complete before their migration into the area. Approximately half of the 250 piles on the project fell within the buffer zone. Due to delays to the start of the project, BAC was left with just over a week to complete this first phase.  A walkway over the wetlands  A second challenge in the project was how to install an eight-foot wide timber pile supported walkway through 290 feet of wetlands to meet and attach to another existing walkway. The walkway consisted of two pile bents every 14 feet with a split cap and cross bracing. The specifications precluded any equipment from entering or bearing upon the wetlands. The solution was to have the pile driver drive the piles from on top of the walkway. The eight-foot walkway was neither wide enough nor sufficient to support the pile driver. To make a safe platform, the following changes were made: Added temporary piles outside the permanent piles.  Increased the size of the split cap and extended the split cap out to the added temporary piles. Increased the size and quantity of the hardware connecting the split cap to piles. Added longitudinal cross braces to the specified transverse cross braces. Installed steel beams across pile bents. Laid crane mats on top of the steel beams. Installed safety railings for protection of all personnel working the temporary platform.  Since the walkway connected to an existing walkway, the team worked their way out two bents at a time. Once all the piles, caps and braces were in, they backed their way out, removing the temporary piles and cutting the extended split caps back to the eight-foot permanent walkway width. This was an efficient method and BAC was able to complete the project on time and under budget, despite the numerous challenges encountered.
Pile Driving Contractors Association Pile Driving Contractors Association