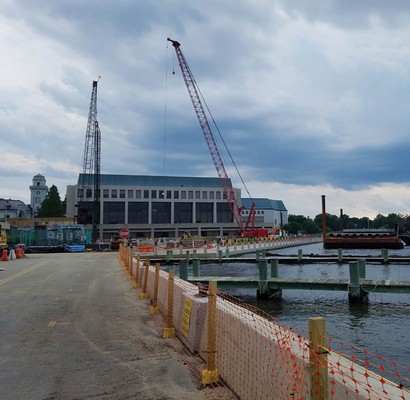 Corman Kokosing was awarded the Naval Academy Cyber Security Studies Building Concrete Piles contract in Annapolis, Md. The proposed building was constructed on a site that had undergone significant changes. Various bulkheads, building foundations and sea walls were constructed on the site over the years as the site had been expanded. Also, various miscellaneous buildings had been built and demolished at the site. Piles remained buried within the footprint of the proposed building. The land at the site was reclaimed from Dorsey Creek and has since required stabilization. The overall scope of this project is to deliver the latest addition to the campus of the United States Naval Academy. This $114 million Center was a design-build of a 206,400 sq. ft. academic building dedicated to the education of midshipmen in all areas of cyber warfare and will include classrooms and lecture halls, teaching and research laboratories, a research and testing tank to support the engineering and weapons laboratories, an observatory, offices and multi-purpose collaborative space for students and faculty. Situated between Nimitz Library and Rickover Hall, the Center will be surrounded by elevated hardscape terraces continuous with those of the adjacent buildings. Corman Kokosing Pile's experience and Atlantic Metrocast's SlickCoat piles process was the perfect combination to provide the pile foundation to build the premier educational and research facilities for the government's unique project. The design began immediately and construction on the Center for Cyber Security Studies began in late 2016 with an anticipated completion in the third quarter of 2019.  Techniques and equipment  Since the piles needed to be 140 feet long, a mechanical splice (Emeca Splice) was used on all piles. A 200 TN Manitowoc would offload the piles from a barge and feed the 70-foot pile piece into the leads of the pile driving 165 TN Terex, which put the crane booms within a few feet of each other twice for every pile.   Unique application of piles Augering and probing was required for the 369 pile locations to locate potential obstructions, and concrete piles were driven (14-in. x 140 LF) with a slick coat application. Design of the proposed building and foundation was coordinated to allow for continued access to the Nimitz Library foundation system. The contractor evaluated slope stability. Slope stability analysis was performed as part of the geotechnical investigation by the Geotechnical Engineer of record, in accordance with UFC 3-220-01 Geotechnical Engineering and EM 1110-2-1902 Slope Stability. Methods of slope stabilization included land-side solutions only. Loading the site was limited prior to and during construction in order to avoid adversely impacting slope stability. The evaluation and subsequent remediation of the site ensured slope stability prior to construction, during all phases of construction and for the long term following construction. The pile fabricator's design team indicated that the concurrent tension/bending moment were well outside of what would be considered acceptable for a standard 14-inch concrete pile. It was necessary to maintain 14-inch concrete piles throughout the site so a superior concrete pile was engineered that would be able to withstand the stresses during driving. The information used was based on the provided: Axial Compression 180 Tons (522 kips) Axial Tension 40 Tons (128 kips) Bending Moment 120 ft-kips  Construction problems and creative solutions The site location was in proximity to the U.S. Naval Academy's Nimitz Library and Rickover Hall. Limited space in and around the project site required the piling delivery be supported by the marine group's tugs and barges, which required installing spud wells to protect the Naval Academy waterfront promenade. The presence of bulkheads, seawall, piles, slope instability and miscellaneous buildings previously constructed at the site impacted the construction of the foundations. Available historical design documents from past construction projects did not accurately show actual conditions. The team prepared for many types of buried obstructions to be excavated and removed to make way for new construction work. Alternatively, it was permissible to locate deep foundations to clear existing obstructions and construct bridging over the obstructions. This alternative complicated the foundation construction, but permitted some obstructions to be left in place. Also, the piles had to be driven in a specific order so cranes could crawl out without interference.  Cost saving measures Due to the extreme length of pile required, value engineering was used to incorporate the Emeca splice, which encouraged the use of concrete piles as a cost saving measure to the owner.   Innovative project management The piles were coated offsite to reduce down drag with Slickcoat, which allowed for a faster coating due to the limited space onsite. The piles were all loaded onto barges already coated and ready for use. Corman Kokosing chose to use a hydraulic hammer rather than a diesel hammer due to the close proximity of subcontractors. A special tray that the power pack could sit on attached to the crane and took the place of counter weights was fabricated. This kept the hydraulic hoses close to the rig and away from potential hazards.  Design changes  Corman Kokosing deep foundations included provisions for locating equipment in areas that remained underwater. Buildings adjacent to the proposed site conduct research using equipment sensitive to vibrations. Vibration monitoring and coordination of work restrictions was paramount during foundation construction activities.  Management or mitigation of environmental considerations The upper strata soils at the site (approximately 100 feet thick) were fairly weak and prone to settlement. A deep foundation system extending in excess of approximately 120 to 150 feet was required to support the building structure. The soil at the site was not suitable to support a slab-on-grade. Noise and ground vibrations caused by construction equipment was monitored. All work met required compliance with Anne Arundel County noise ordinance and ground vibrations did not exceed the project's established threshold value. Corman Kokosing Construction is proud to have been a part of this project.
Pile Driving Contractors Association Pile Driving Contractors Association