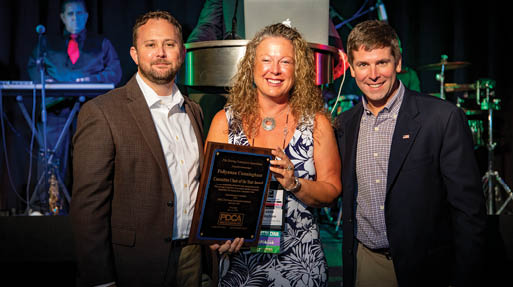 The various PDCA committees are comprised of volunteer members and are the lifeblood of the organization. Committee members and their respective chairs work diligently every year to accomplish a wealth of activities that promote and improve the driven pile industry. While all PDCA committees and committee chairs work tirelessly to give back to the entire membership, only one chairperson can be selected to hold the honor of PDCA Committee Chair of the Year. The recipient of this award, selected by the Board of Directors, is the person who shows dedication, commitment and exemplary leadership, not only to their committee and its tasks, but to all of those in the driven pile industry. At the PDCA 22nd Annual International Conference and Expo, PDCA selected Pollyanna Cunningham with International Construction Equipment, Inc. to receive the Committee Chair of the Year Award for her tremendous efforts with the PDCA Communications Committee and dedication to PDCA, its members and its overall cause. Cunningham has chaired the PDCA Communications Committee for 10 years, after having been asked in 2009 to step into the role. Despite her decade-long commitment, she was surprised to hear her name called for the award this year. "I was completely shocked; I had nominated other folks to win!" she said. "I didn't expect it. I am grateful and excited, all rolled into one." It's Cunningham's sheer enthusiasm for PDCA that made her the frontrunner for the Committee Chair of the Year award. "For as long as I can recall at least for the last six years that I've been on the board and in an executive committee position Pollyanna has been consistently engaged," said Scott Callaway, president of PDCA. "Either as a committee chair or as a board member, her engagement has been unwavering. She's got a lot of energy and that shows in everything she does. Out of everybody in the entire organization, Pollyanna has been consistent in her engagement and her activity with PDCA, but especially as a committee chair." The main function and focus of the PDCA Communications Committee is to plan and coordinate the content of PileDriver magazine, the monthly PDCA e-newsletter and www.piledrivers.org. In the past year, Cunningham has also spearheaded exciting new developments in PDCA's suite of communications, including revamping the association's website and launching the all-new PDCA mobile app. "We took a look at the website and the PDCA app, and we did get the app launched and running," said Cunningham. "We're hopeful to begin working in different and new sectors to integrate all of this technology together." Most PDCA members are very familiar with Cunningham and her quest for articles in PileDriver, proving how effective she is when it comes to managing and representing the Communications Committee. "I love the fact that [representing the Communications Committee] gives me a window to see and talk to other people," she said. "With this role, I feel like it gives me almost a special mask; it gives me the confidence necessary to go out and start talking to people to find out what's going on in business and help them get their message out there." Cunningham clearly holds a passion for PileDriver magazine and is eagerly anticipating the magazine's upcoming editions. "We are getting really excited about the steel edition, which is Edition 5," she said. "And we're going to prove that steel and concrete work together and put a full edition together on those job stories for Edition 6. For Edition 1 [2020], we're going to bust out with a full concrete edition. But we won't forget about our friends in timber or anywhere else, and we have to get a new focus on all the equipment manufacturers. I really am looking forward to that." The Communications Committee is actively seeking PDCA members to join and participate. "We have fun," said Cunningham. "It's a great way to meet other PDCA members and really get networked and get to know people." To join the PDCA Communications Committee or to request more information about any of PDCA's committees, phone the PDCA office at 904-215-4771.