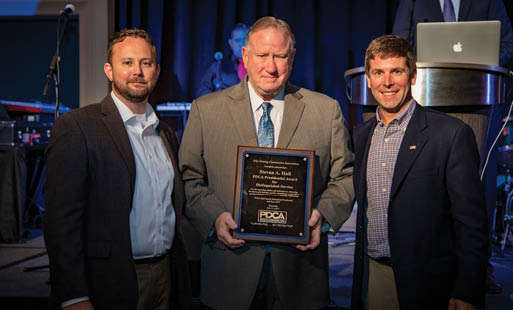 The Presidential Award for Distinguished Service is an annual award given to a person who has made significant, ongoing and long-term contributions to PDCA and the pile driving industry through effective leadership, support and participation. For 2019, the board unanimously had one person in mind as the clear winner. Members of PDCA are undoubtedly familiar with Steve Hall; for nearly 14 years, Hall has represented PDCA as its executive director, and has done so with dedication, passion and unwavering belief in the driven pile. Hall retired from his role at PDCA in February. To honor his contributions to the association and industry at large, at the PDCA 22nd Annual International Conference and Expo, association president Scott Callaway presented Hall with the Presidential Award for Distinguished Service. "I was very, very surprised [to hear my name called for the award]," said Hall. Regardless of his surprise, the board could not think of anyone better suited to receive the award this year. "Steve Hall received the Presidential Award for Distinguished Service because of his dedication and commitment to PDCA throughout his 14 years as executive director," said Callaway. "He has been a true leader and a believer in the driven pile industry to the better of us all." Hall says that when he originally proposed the idea for the Presidential Award for Distinguished Service to the board in 2008, the intention was to recognize members who demonstrated a strong commitment to PDCA in a volunteer capacity. "It was so unexpected on my part because I'm not a member," said Hall. "I had a job to do and I wanted to do that job to the best of my abilities. There are a lot of people deserving of this award. I never expected that I would be selected [or that I was even being considered to win]. I guess the best way to describe it is honored." When Callaway, current PDCA executive director Frank Peters and vice president Jason Moore announced Hall as this year's award recipient at the dinner reception during the annual conference, Hall was visibly moved and received a standing ovation from the crowd of PDCA members. Hall was so overwhelmed that he almost didn't register what was happening. "When they called my name, to me the award is so special that it evoked a bit of an emotional response from me," said Hall. "By the time I got up to the front, I had tears in my eyes. I think I probably noticed everyone standing up but because it was such an emotional experience, my vision was pretty narrow. The whole night was totally overwhelming." Based on the reaction of the crowd, Hall has much to be proud of regarding his career with PDCA. "Speaking generally, [I'm most proud of] the growth of PDCA from the time I began as executive director to the time that I retired," he said. "And equally as important, the elevation of the stature of PDCA within the industry. I think that we became more viable, we were looked at by others in the industry and government as a significant contributor to the progressiveness of driven pile. I'm proud of that. I'm proud of the fact that we made some tremendous strides in just about every aspect of PDCA. That wasn't always easy to accomplish." As much as he enjoyed his time in the PDCA office, Hall knew that it was time for him to retire. "There comes a time when you should retire, and you'll know when that is," he said. "I knew that my time to retire from PDCA was when I left in February. I can say that I'm enjoying it thoroughly." Hall has plans to travel with his wife, Cathy, using the travel fund raised by PDCA members as a retirement gift, and has been staying busy with various volunteer opportunities, such as getting involved with a no-kill animal shelter as well as the Wounded Warriors program. He also completed a photography course at the University of North Florida and already has several camping trips under his belt. Above all, when he reflects on his career, Hall hopes that PDCA members have benefitted in some way through his role with the organization. "I always said to the people who worked with me is that the PDCA members are the ones that pay our salaries and we have to be cognizant of that," said Hall. "We have to do our very best jobs [for them]. I hope I did that well and that the people I represented through PDCA felt like they were represented as best they could be. "I hope that people, when they find their place in this world, that the satisfaction they get in their jobs is like the satisfaction that I got working with PDCA. It was such an opportunity and a pleasure to work with such a dedicated group of members."