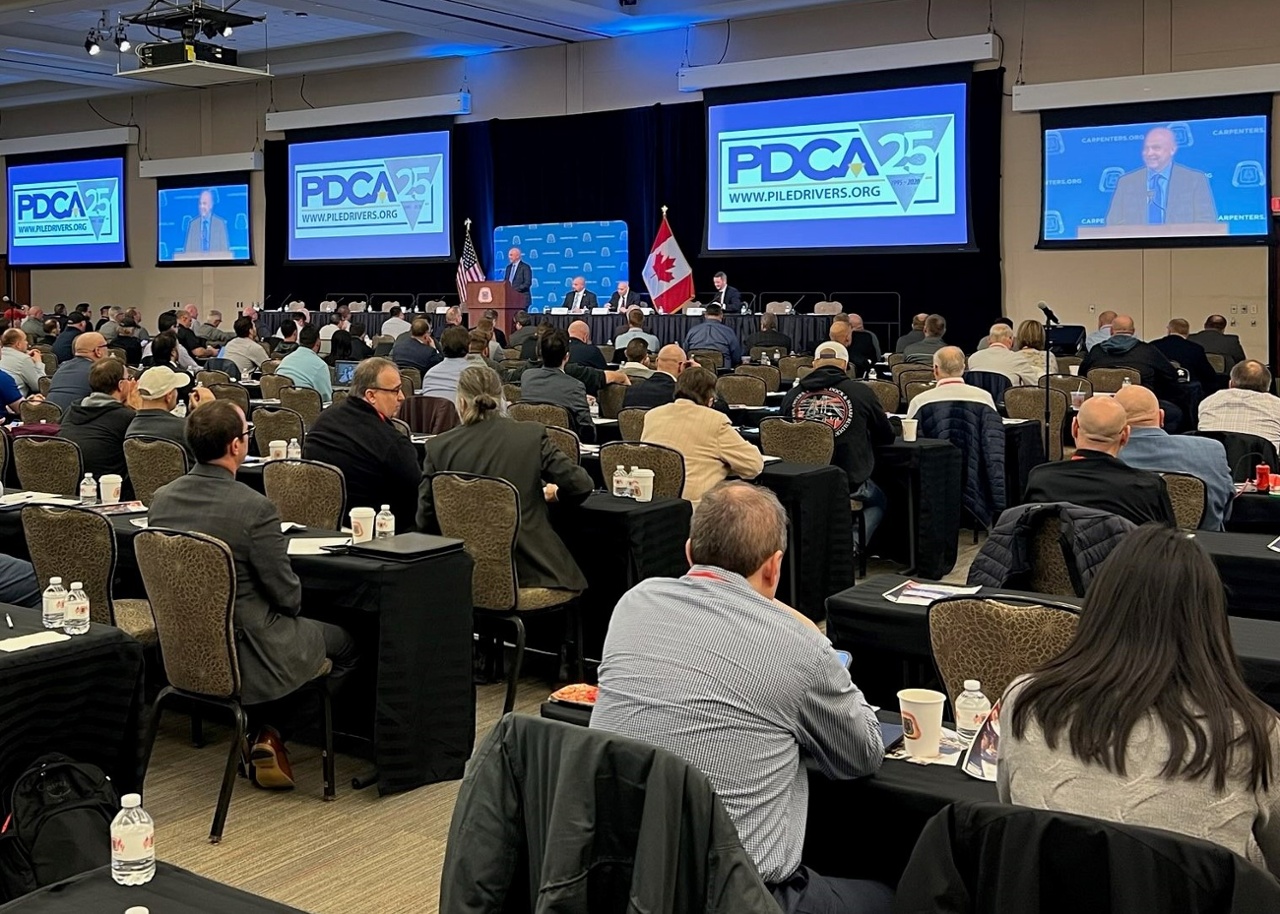 The UBC Pile Drivers and Divers has been a Labor Organization member of PDCA for the last several years; representatives of the organization regularly participate in the PDCA Annual Conference, its standing committees, and PDCA Chapter events. PDCA values all association members and embraces opportunities to grow various partnerships with the companies and organizations it represents.

As a North American labor organization that works closely with many PDCA member companies, the UBC Piledrivers and Divers also offers its members essential, unique, and often cutting- edge preparation and training for performing driven pile work on jobsites. An important part of the training program it administers is its UBC Millwright Piledriver Leadership Conference. For its 2023 event at the international headquarters in Las Vegas, Nevada, it hosted PDCA Executive Director Frank Peters as one of the speakers to address the large assembly of approximately 750 pile drivers. Mr. Peters took the stage on Wednesday afternoon (January 25, 2023) and detailed the PDCA story, its industry mission, international reach, professional development and training programs, market reach through industry leading publications, and critical function in advocating the driven pile method in deep foundation construction. 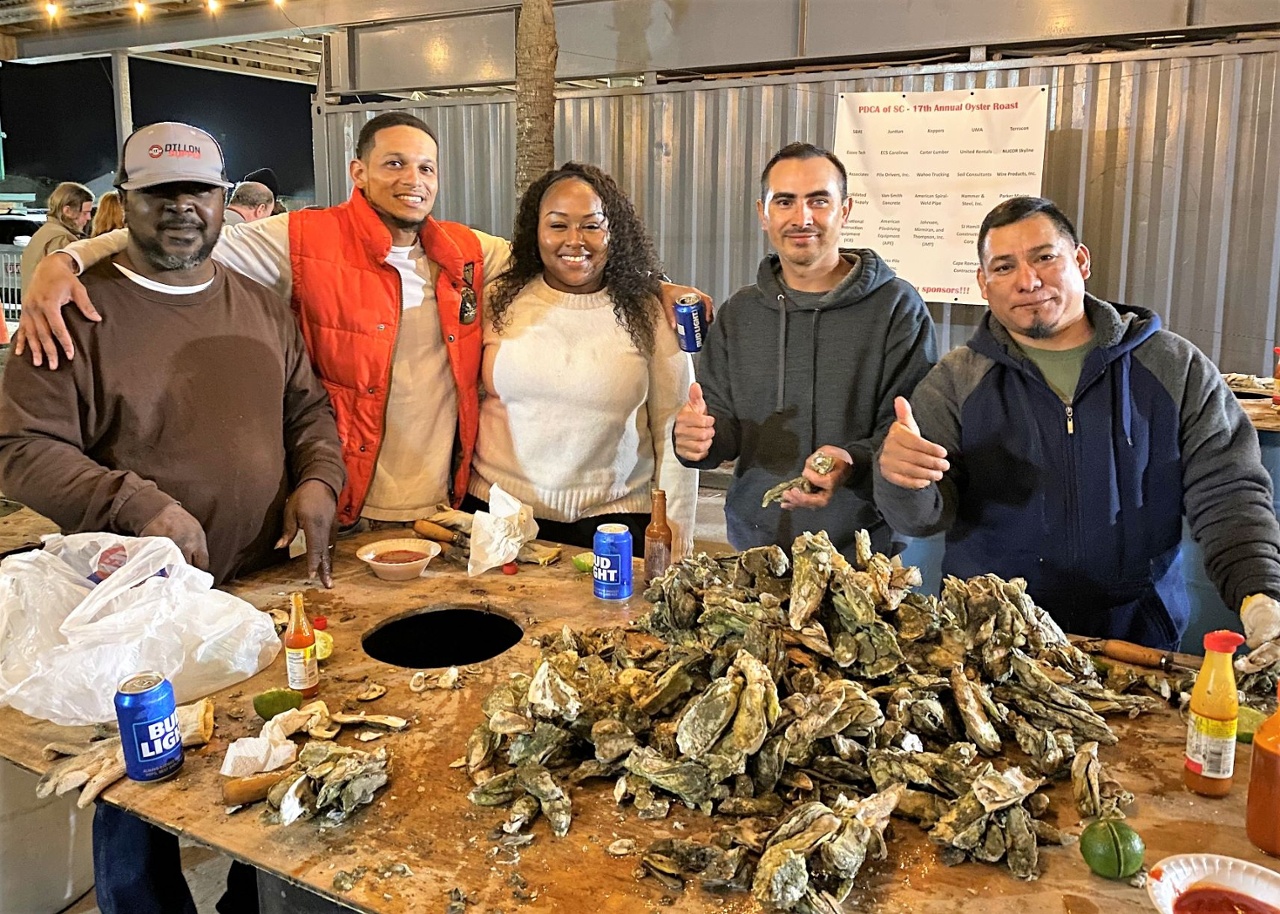 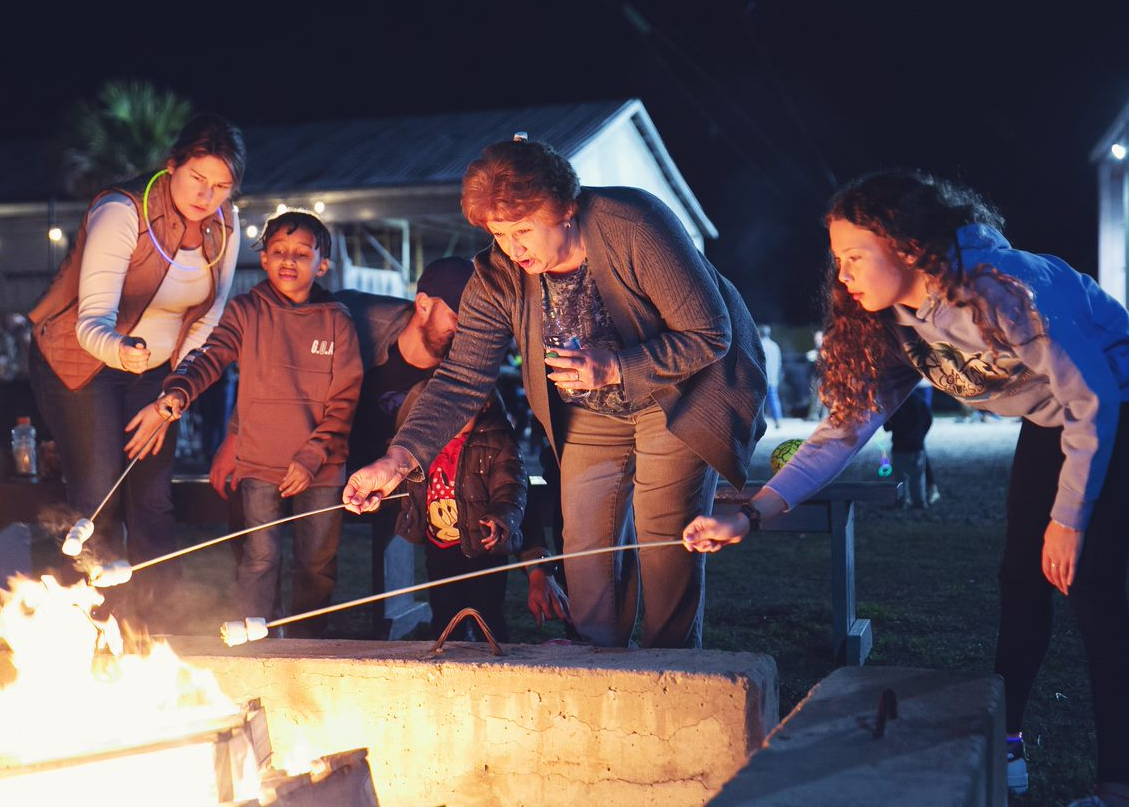 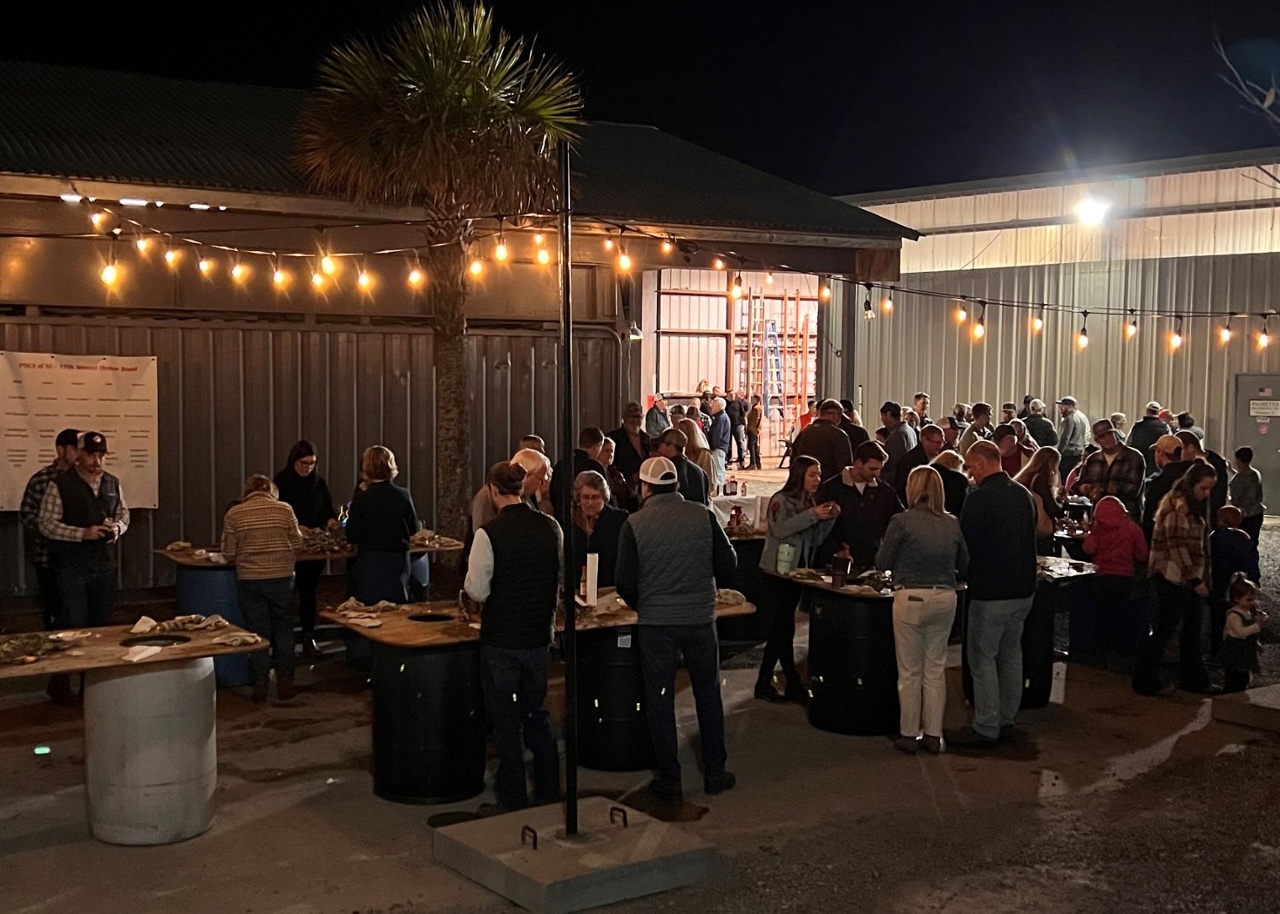 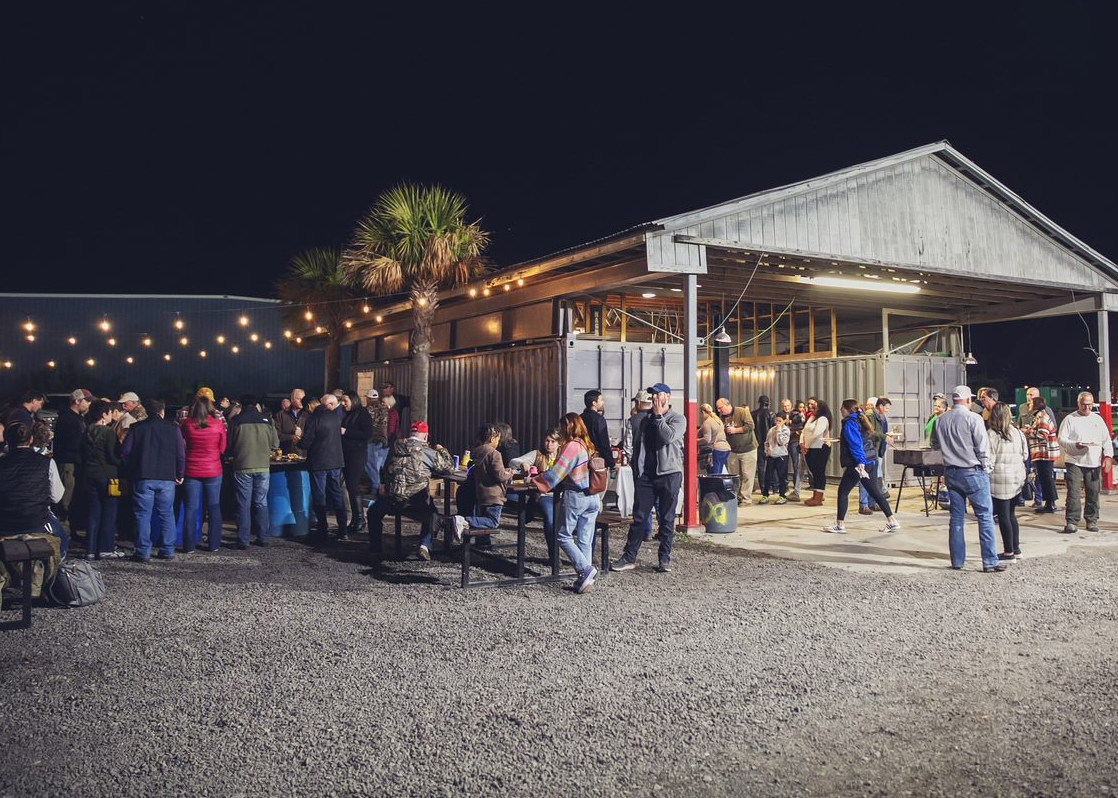 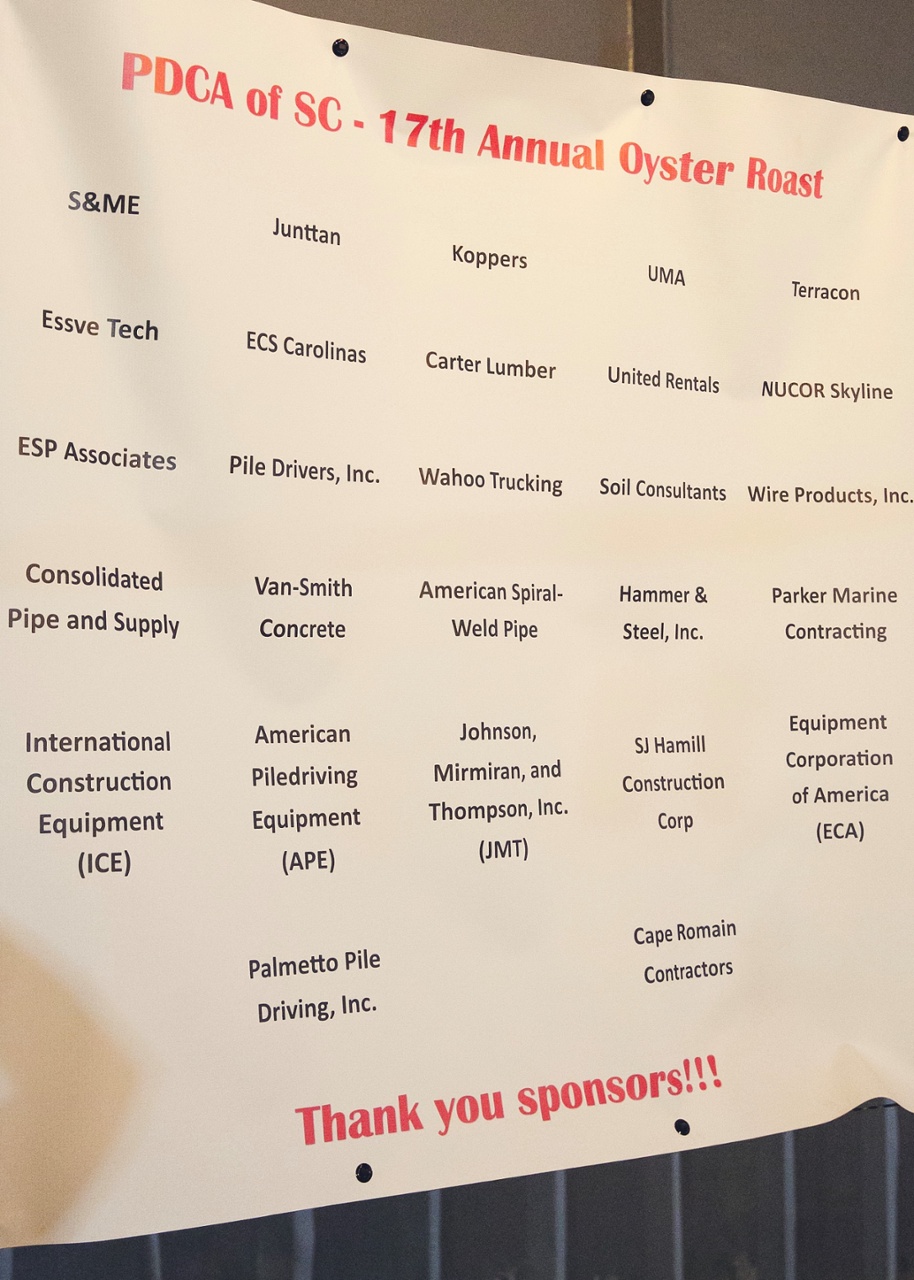 Please join PDCA in welcoming the newest members of the leadership team at the PDCA Texas Chapter. Following the Chapter elections held January 18th, the 2022 President and Vice President retain their posts. Brandon Bicknell of Russell Marine, LLC will lead the group for another year, while Condon Verble from McCarthy lends his support again, as second in command. Meantime, two PDCA Associate Members emerged as winners for the open seats of Treasurer and Secretary. 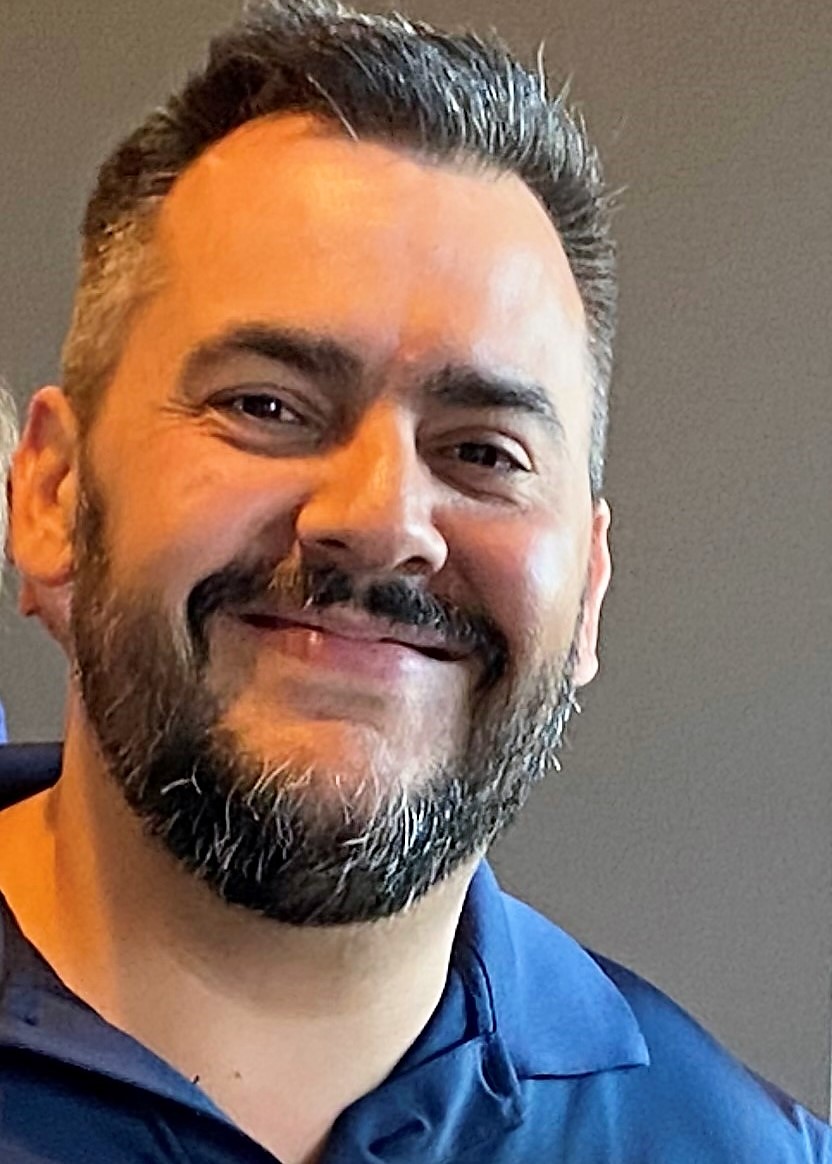 Mike Leal is the new Chapter Secretary for 2023.The Outside Sales Manager at Lodge Lumber Co. in Houston has been with the company for the past decade. During that time, he has become heavily involved in PDCA, including through national and Chapter events and committee participation, among other means of participation. Said Mike, following his election; "I'm honored to join the
board and look forward to supporting the efforts toward growing the Chapter and delivering value to its members." 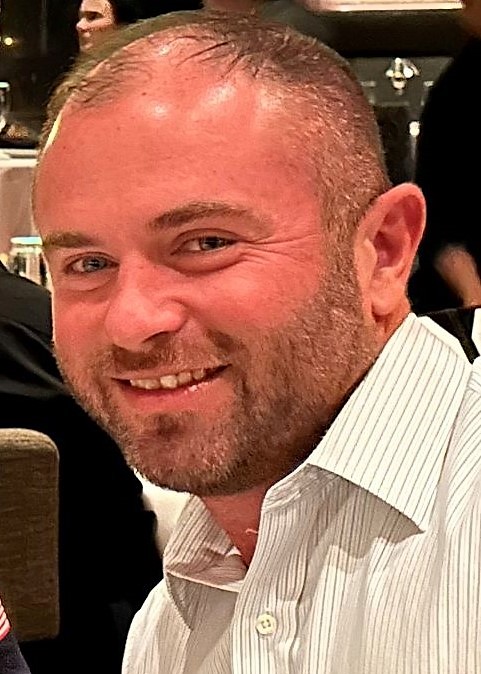 The new Chapter Treasurer is Derek Brodnax. A sales representative at Service Steel Warehouse, Derek has developed a large network in Texas and beyond, in the driven pile industry. He too can regularly be seen at PDCA Chapter and national events, as well as jobsites throughout the south. Regarding his new post with the Chapter, he tells us: "I am grateful to be elected to the board to serve our members - we are excited to see what 2023 has in store!"


Regarding the schedule for Texas Chapter functions in 2023, they have released the following calendar. PLEASE BE ADVISED, THE JUNE 9 GOLF DATE IS TENTATIVE. So, save the dates! 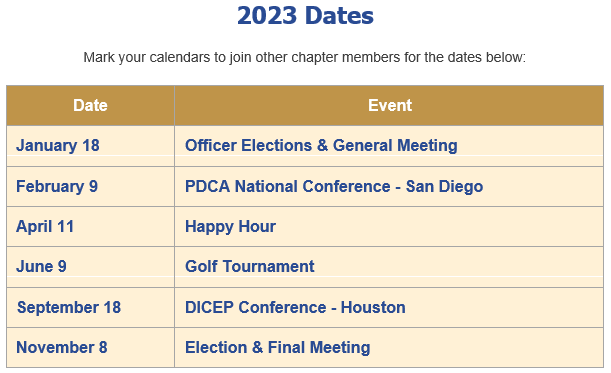 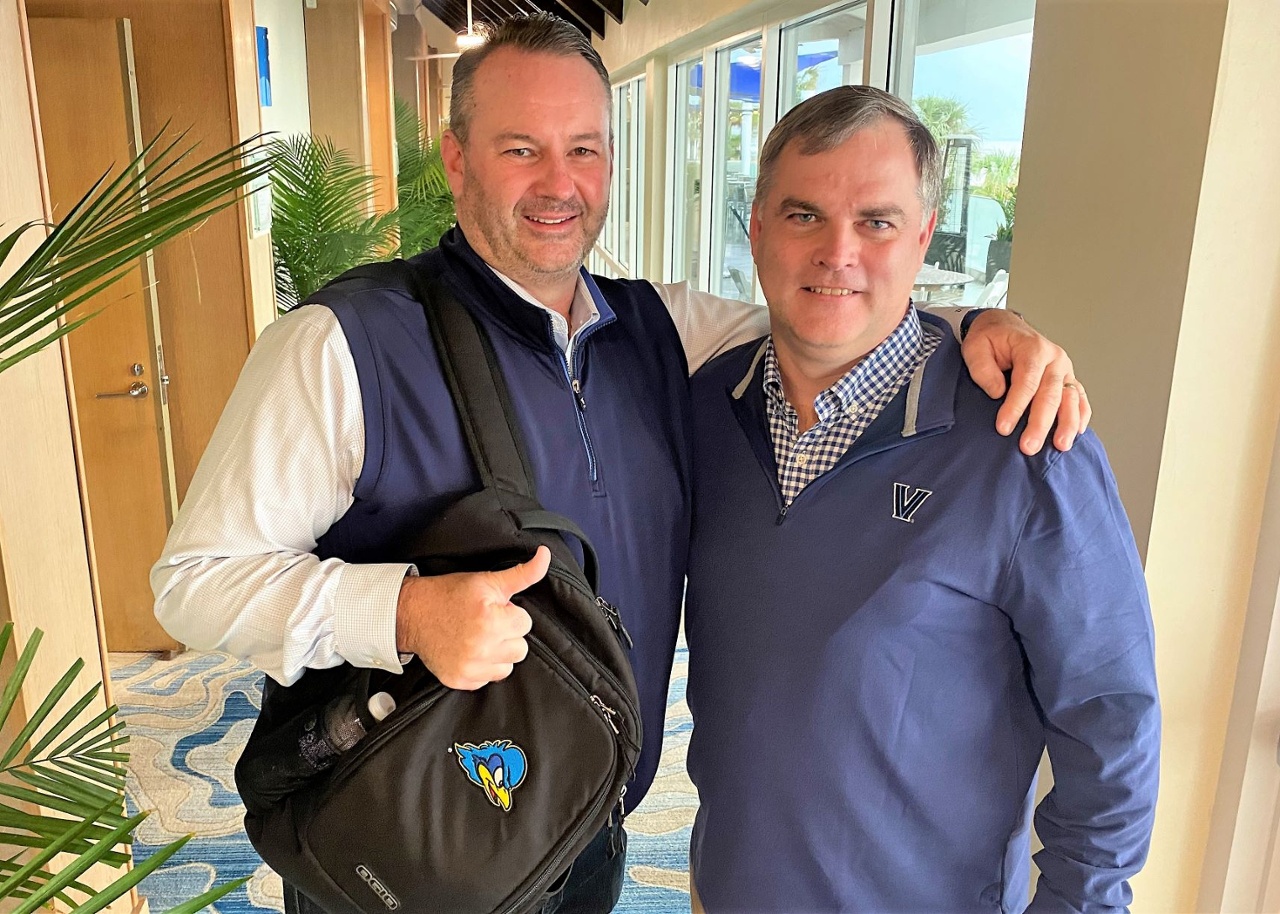 The PDCA Board of Directors consists of members who are contractors, associates, and engineering affiliates from all around the continental U.S., and it's not uncommon that sometimes they compete against one another in pursuit of a driven pile job. But in the spirit of strengthening a singular voice for the pile driving community, part of the Pile Driving Contractors Association vision, the Board members come together several times each year to provide industry leadership for the hundreds of Members who participate in PDCA from four continents around the world. The first, formal meeting of the PDCA Board of Directors took place in January.

The 2023 Strategic Planning Meeting was an opportunity for Board Members to gather and discuss a variety of issues and initiatives that impact the advancement of the pile driving industry. Previously, we posted a brief summary of the business conducted during 2023 Strategic Planning, but there were a couple additional news reports from the event that you should know: 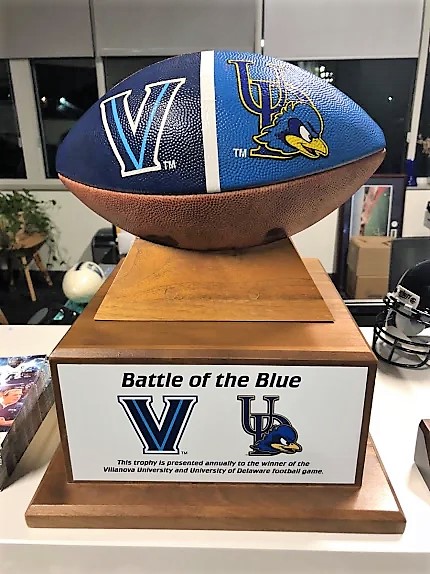 As noted above, there are times when pile driving contractor members who are business competitors, encounter each other as fellow PDCA members during industry events, both at the Chapter and national levels. PDCA benefits most when field rivals can come together behind a similar, important objective such as advancement of the driven pile. While we don't know of any business rivalries that may or may not exist between PDCA Past-President Larry Moore and PDCA Northeast Chapter President and national Director David Price, we found it noteworthy that they attended the final day of 2023 Strategic Planning advertising their opposing, favorite teams which are part of a longtime college football rivalry. (Trophy photo credit: David Price.)

Price, the CEO at Linde-Griffith Construction Company in New Jersey, is a former offensive lineman on 1980's football teams for the University of Delaware Blue Hens. He proudly displayed his backpack featuring the UD mascot. Meantime, GeoStructures, Inc. CEO Moore has a daughter and son currently pursuing undergraduate degrees from Villanova University. He circulated around the meeting and ancillary events sporting a stylish, 1/4-zip pullover with the official Villanova logo. For those who may not follow Colonial Athletic Association, FCS football, Delaware vs. Villanova is an age-old rivalry, pitting the two teams against each other for the last game of the season since 1895. Sports or business rivalries notwithstanding, Moore and Price are in full agreement that 'a driven pile...is a tested pile.'

We hadn't intended to stoke any tensions among football rivals, however both parties have volunteered to the author that the series record for this game firmly favors the blue team...we will leave it to your own resourcefulness to learn which one, if you choose to do so. And Then There Was The Ric Flair Sighting: 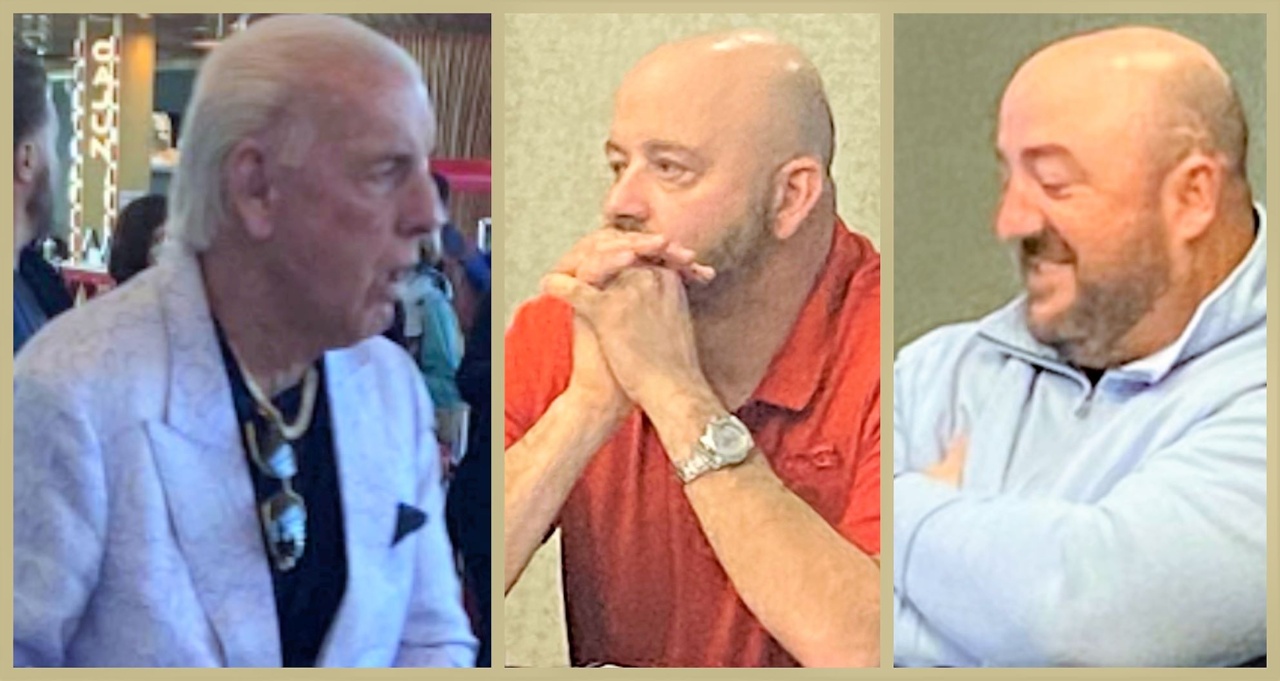 (L-R) Pro wrestling legend Ric Flair stares down longtime fans Kevin Gourgues, Brandon Bicknell at the airport.
Most driven pile professionals, at one time or another, have heard reference to the pro wrestling move called the 'piledriver.' Well, at the conclusion of 2023 Strategic Planning, the piling pros and the WWE collided. The site, Tampa International Airport.

As we understand it, both PDCA Past-President Kevin Gourgues and PDCA Texas Chapter President Brandon Bicknell finished the PDCA event and headed for the nearby airport to return to their respective homes via Houston Intercontinental Airport. Brandon boarded their plane and texted Kevin, who was waiting to board, that he had spotted pro wrestling star Ric Flair. Once Kevin boarded the plane, he saw Ric in the first row of seats. Fast forward, the plane arrived in Houston and the passengers deboarded. Kevin again spotted the WWE icon walking near a Ray Ban store; he was quick on the draw (like a good hunter) and snapped a photo from a distance of Flair, who many consider the 'greatest wrestler of all time.'

Imagine the excitement from Brandon of Russell Marine LLC and Kevin of Patriot Construction & Industrial LLC, who are self-described fans of Flair, when the legend ended up on their same flight to Houston! We aren't sure if it was because the two company presidents were starstruck and speechless, but neither produced an account of small talk with him, his autograph on anything or even a selfie on their phone cameras. However, the historical airline records will reflect that they shared a memorable flight with The Black Scorpion...and neither of them was subjected to a piledriver!

The encounter in Kevin's own words, as it appears on his Social Media: "Jet flyin, styling, Rolex wearing, diamond ring wearing, kiss stealing, wheelin and dealing son of a gun was sitting in row one 1st class on my flight today. And he was still having trouble holding "them alligators down". Wooooooooooo!!!!"
###

Invitation 1 of 3: Submit Abstract on Pile Driving for DFI48 By Jan. 23rd 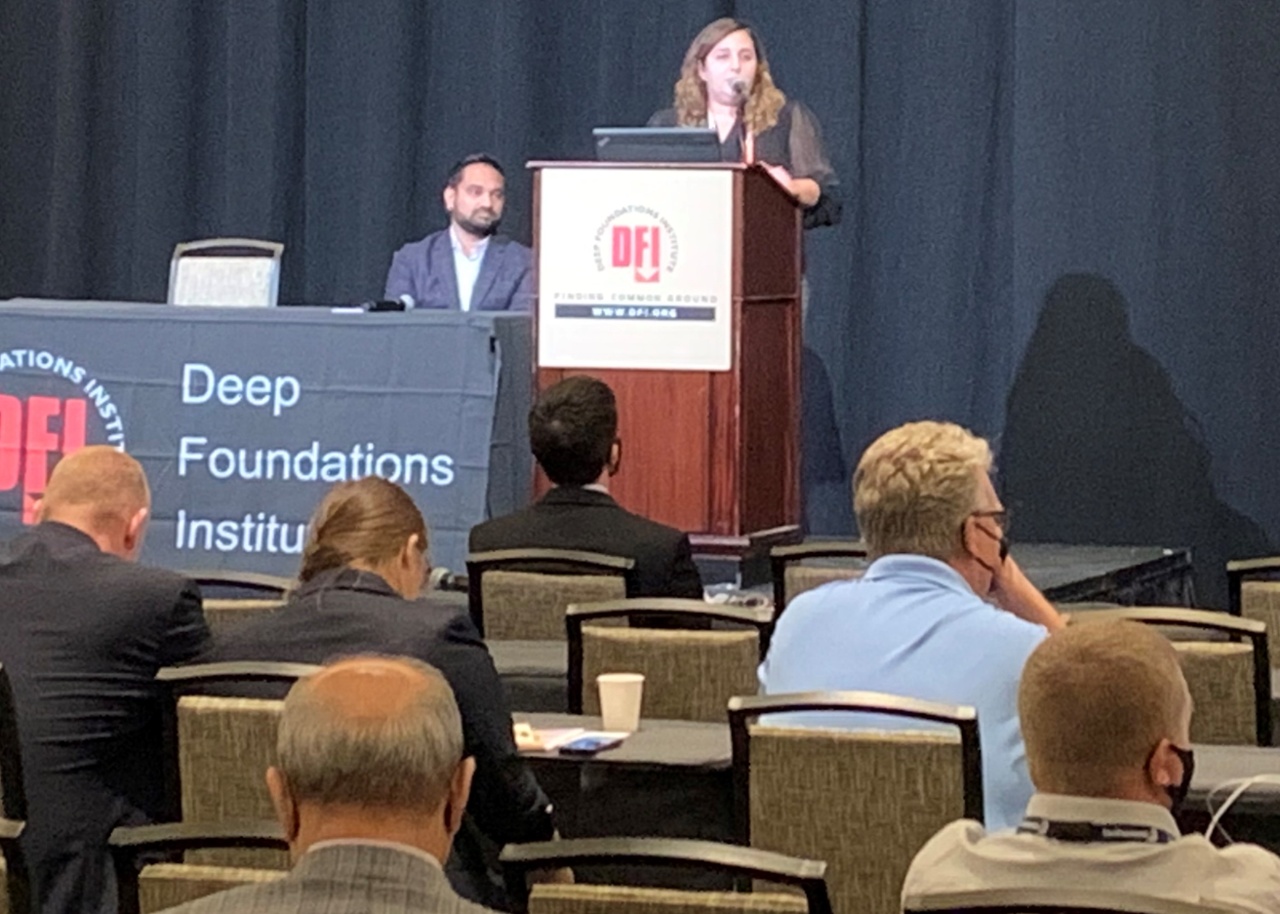 Help Us Improve the Driven Pile Industry at DFI48

Through the important, ongoing relationship that PDCA maintains with industry partner DFI - Deep Foundations Institute, we enthusiastically encourage you to consider submitting your abstract, paper, or technical presentation to that organization for consideration as a topic for the upcoming DFI Annual Conference. The submission deadline has been extended; you have until January 23rd to send in your proposal.

Please review the instructions below and click on the image to pursue this opportunity. 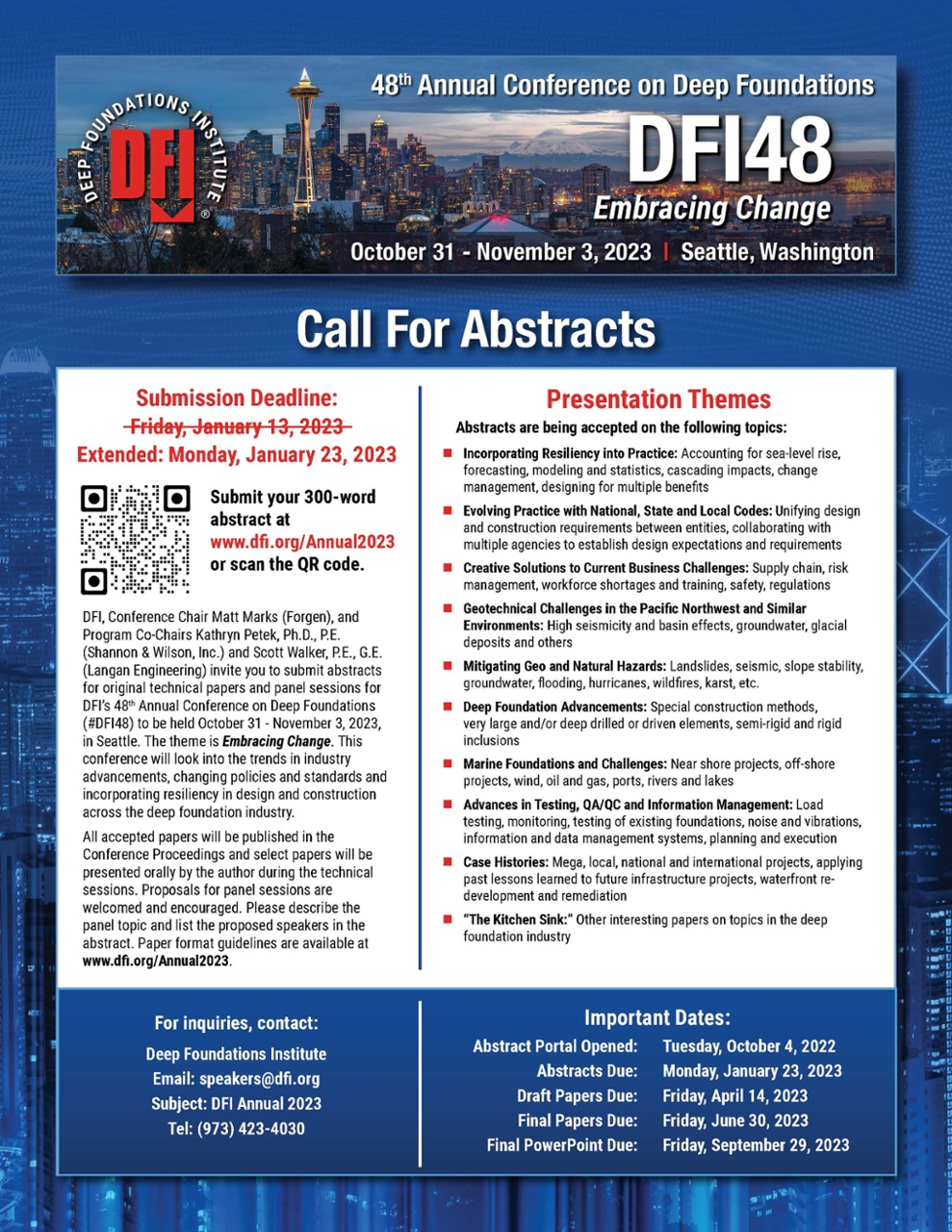 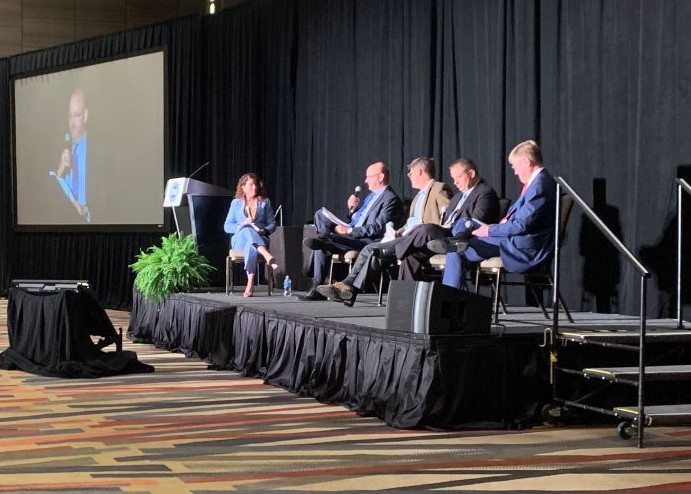 Help Us Improve the Driven Pile Industry at IFCEE 2024


Every three years, deep foundations industry partners PDCA, DFI, ADSC, and the GeoInstitute bring you the International Foundations Congress and Equipment Expo, or IFCEE. The next event will take place in May 2024 in Dallas, TX and will feature an expansive lineup of technical presentations among numerous other important resources for deep foundations professionals.

(Pictured: PDCA, DFI, ADSC, and GI leaders on stage at IFCEE 2021 for public discussion of common interests in deep foundations.)

You are invited to submit a presentation proposal to the committee considering technical content for IFCEE; please click the image below to learn more. Submissions for IFCEE 2024 are due by Feb. 23rd. 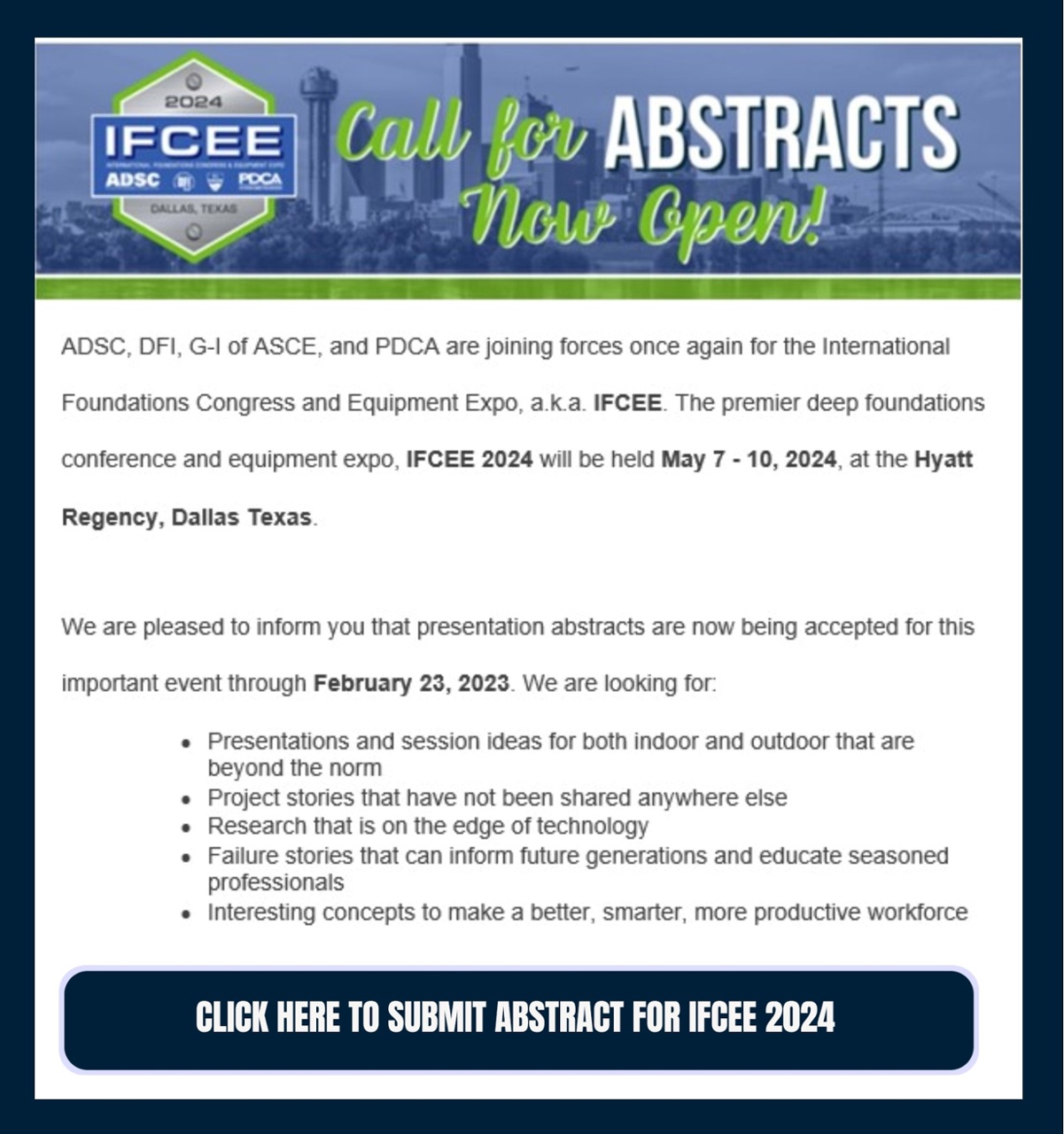 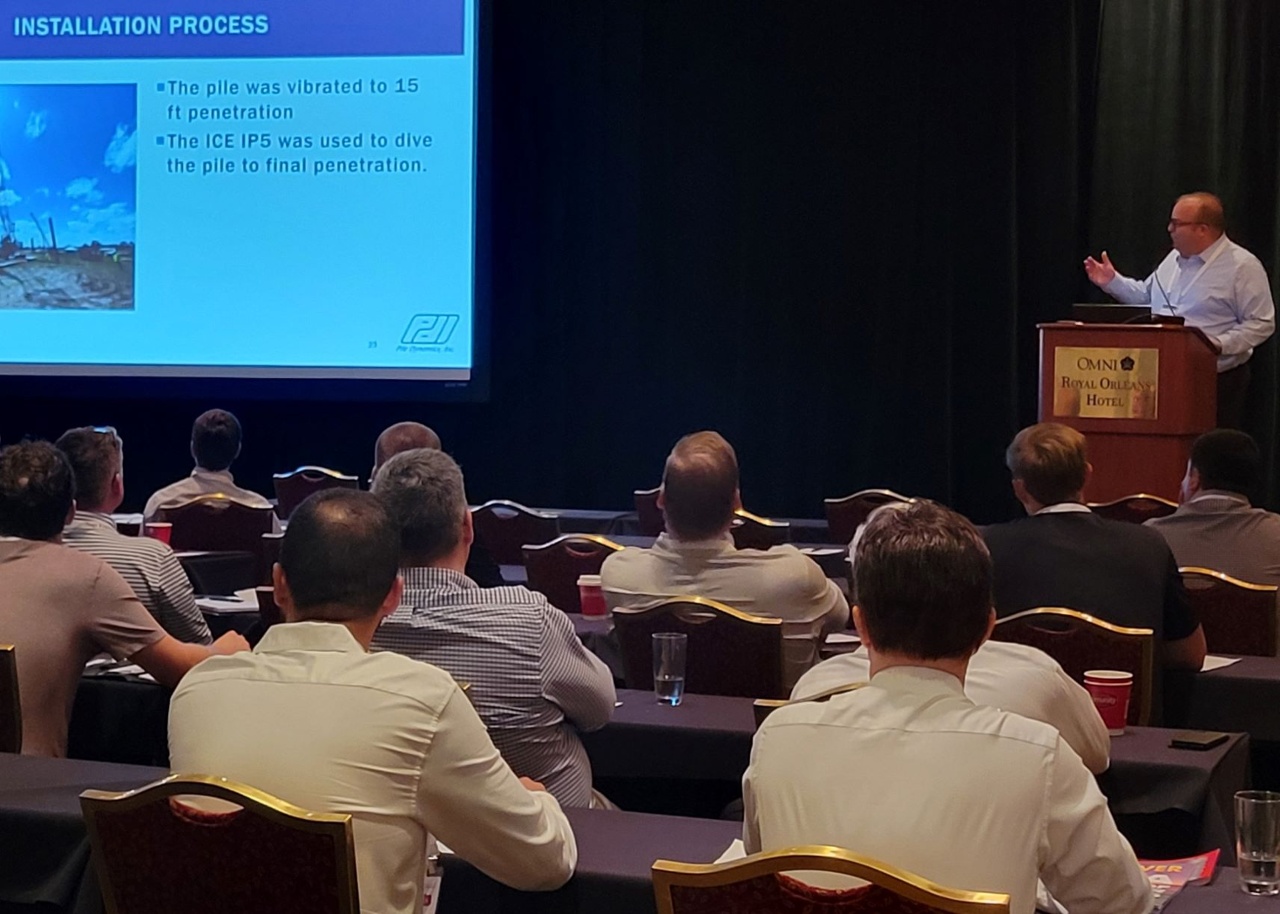 Help Us Improve the Driven Pile Industry at DICEP 2023


The annual technical conference of PDCA is the Design and Installation of Cost-Efficient Piles, or DICEP Conference. The 2023 event is scheduled to run from September 12-13 in Houston, TX. Deep foundations practitioners who may have a topic to present to attendees of this popular event are encouraged to submit your proposal for consideration.

Please see the event information below; click the document to submit your proposal no later than April 17th. 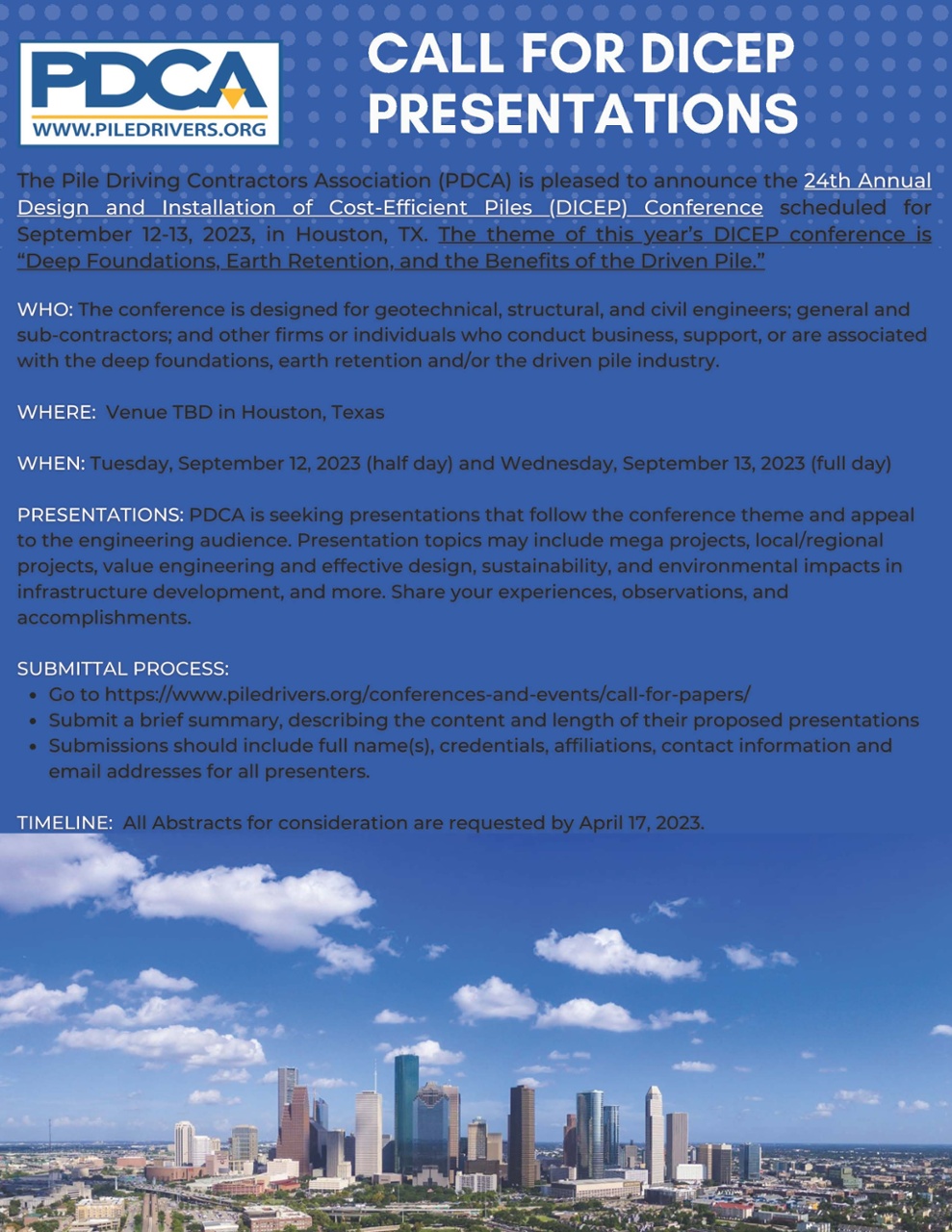 Board of Directors Gathers for 2023 Strategic Planning 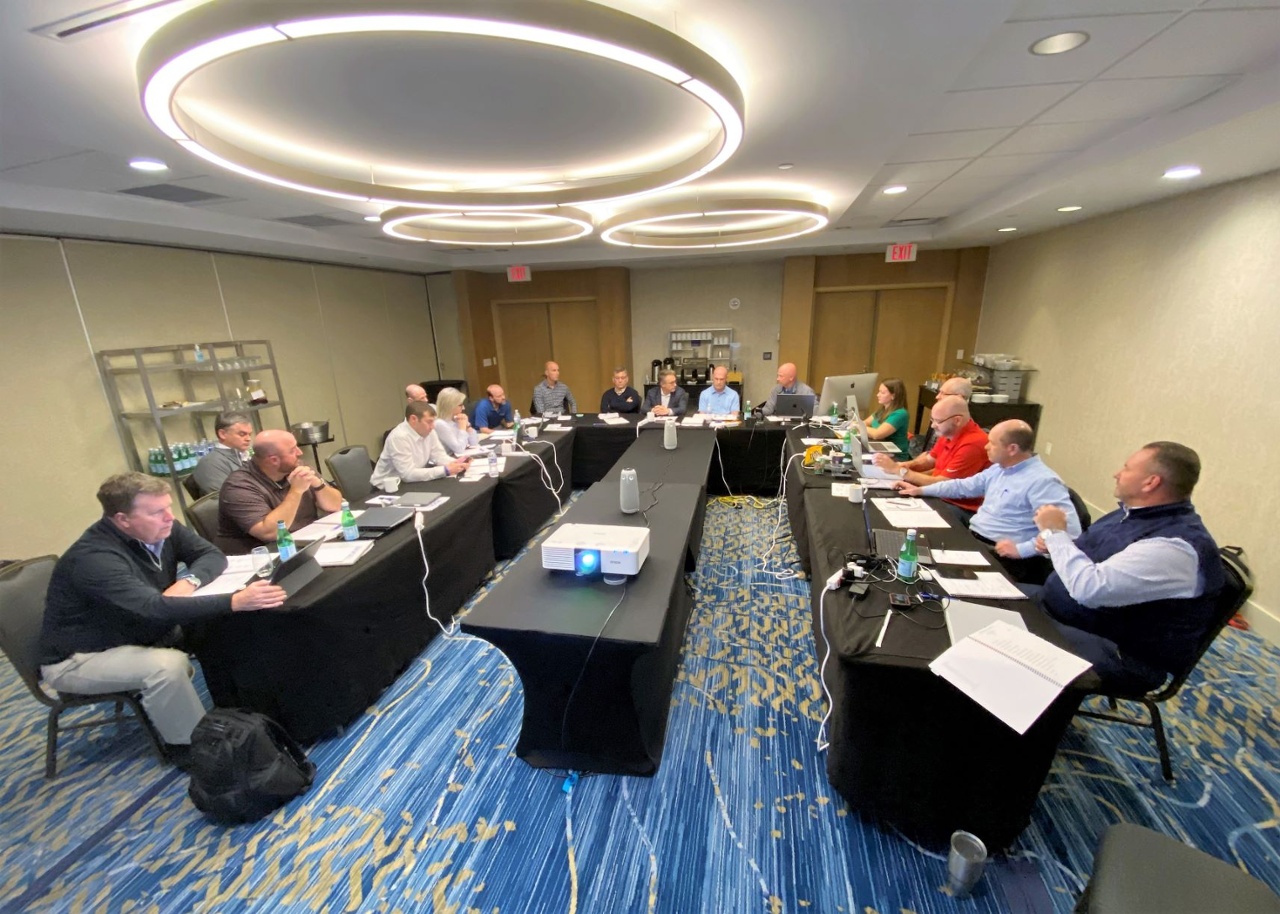 The 2023 PDCA Board of Directors has charted a vision to continue association growth and strengthen the driven pile as the preferred deep foundation method during the Strategic Planning Meeting. Held in early January at Clearwater Beach, Florida, the leadership team acted on an agenda which included passage of a 2023 budget, review of organizational governance, discussion of operations, analysis of Standing Committee activity, enactment of policies designed to ensure an optimized membership experience, instituting a program for charitable giving, and affirmation of the ongoing commitment to serve members through meaningful engagement.

Welcome Heath! The first quarterly meeting of the Gulf Coast Chapter gives Secretary Heath Stevens his debut in leadership. He was elected to the position by the membership which entrusts him with certain duties such as maintaining a careful record of Chapter business proceedings.

Sec. Stevens' Meeting Minutes will establish Topgolf as a business meeting venue; someone send Kelly Clarkson the memo.
Following the March 2nd gathering at TopGolf, André said the Chapter will release the remaining dates for its 2023 events. Those will include three additional quarterly meetings and a new Sporting Clay Shoot, which becomes an annual event rather than an outing that occurs every other year. Watch your inbox and check back here regularly for more information on upcoming events in the PDCA Chapters.

New Policies Enacted by PDCA Board Are Now In Effect