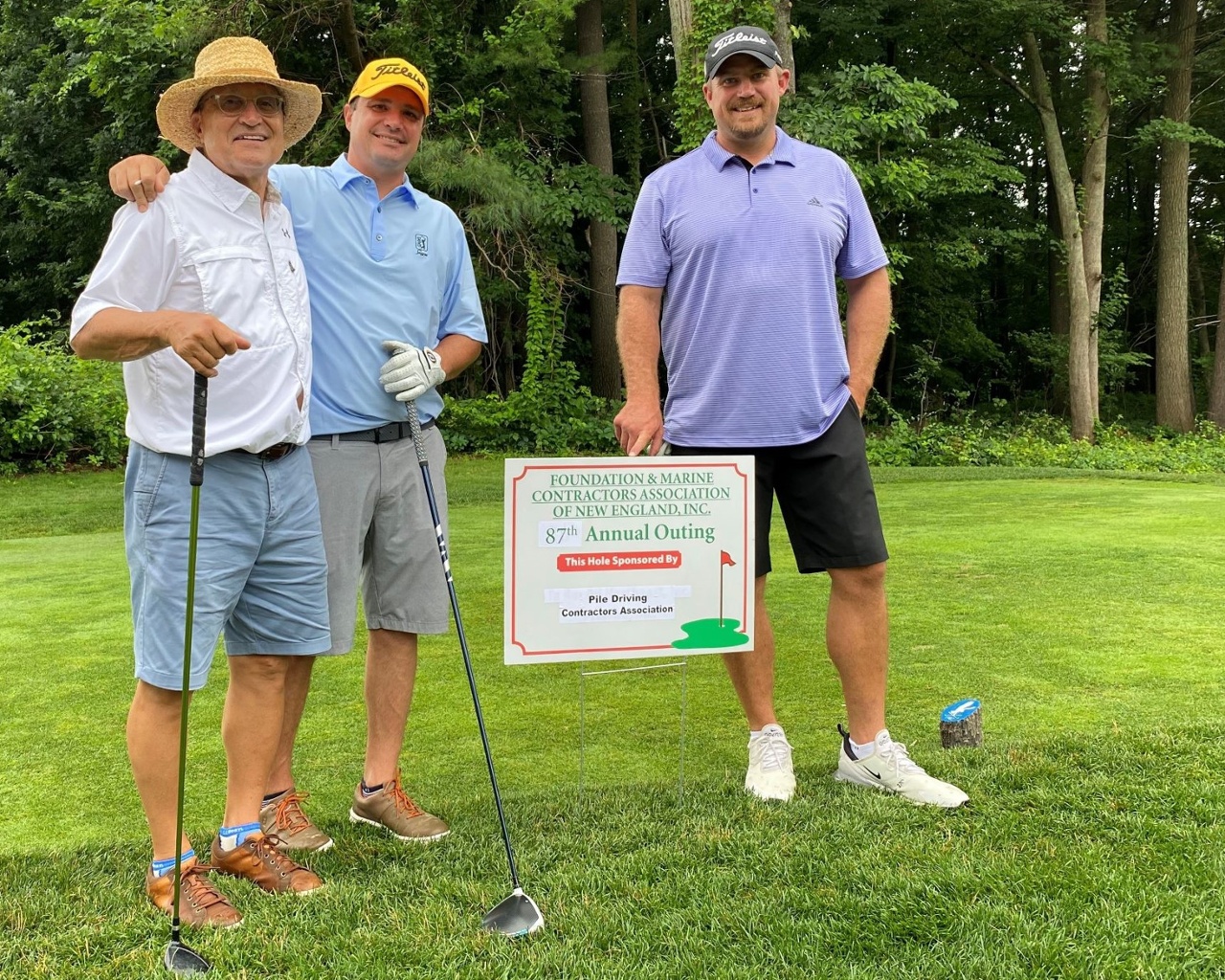 (Left to right: The Equipment Corporation of America team included David Sciortino, Anthony Sciortino and Patrick Mix)
PDCA was proud to be a hole sponsor and dinner guest at the Foundation & Marine Contractors Association of New England, Inc., Eighty Seventh Annual Outing, a golf and banquet event held July 18, 2022 at the Framingham Country Club in Framingham, Mass. Festivities began with check-for golfers who wanted to warm up at the driving range. All golfers were provided with a PDCA-logo, draw-string bag to carry golf balls, tees and other necessities for a day on the links. A hamburger and hot dog lunch was also available underneath the big tent near the golf cart line-up. Players teed-off promptly at 12:30 PM EDT; the capacity attendance required two foursomes for each of the 18 holes. Once the best-ball tournament was underway, each team encountered various 'challenges' throughout the course such as Closest to the Pin and Longest Drive. Following completion of the round, teams gathered back under the big tent for a cocktail party and gift distribution. Then at 7:00 PM golfers and dinner registrants gathered in a nearby banquet hall for a surf and turf dinner, the installation of new FMCA officers and awards. 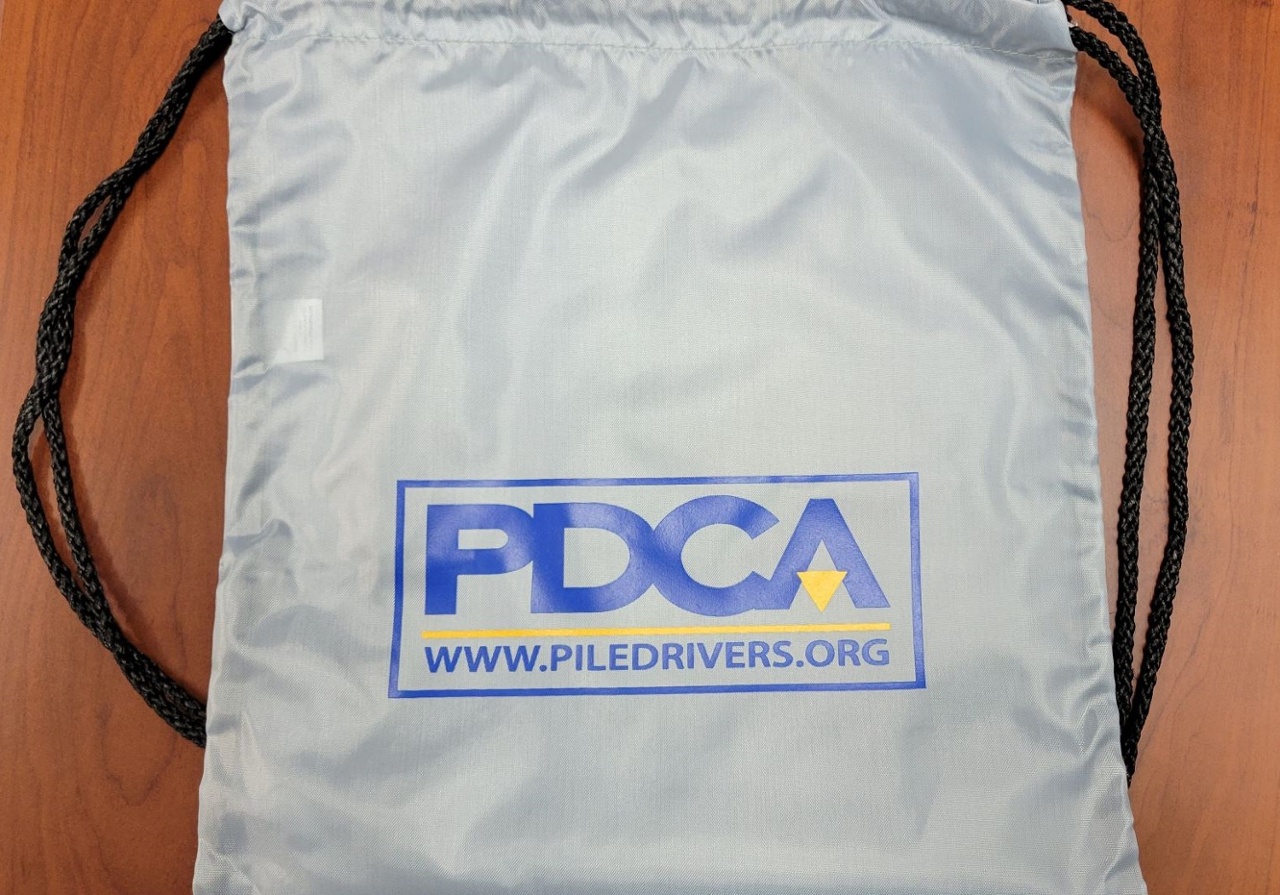 Draw-string bags provided to FMCA outing participants
While numerous employees of PDCA-member companies participated in the annual event, Brad Roberts of GZA GeoEnvironmental was recognized for his 16 years of service to the FMCA as Secretary and Drew Floyd of Keller was saluted for completing his role as Treasurer for the same period of time. The two graciously embraced their retirements from FMCA. From everyone at PDCA, we congratulate Brad and Drew on a successful tenure and selfless industry advocacy. Also notable, Bob Tonning of Phoenix Foundation assumed the organization Presidency as Angelo Colesante of East Coast Slurry stepped away.

(Brad Roberts stands at the FMCA officer's table as he departs his long tenure as Secretary)
PDCA sends a special 'thanks' to Dario DiBona, Outing Committee Chairman, for coordinating our sponsorship and draw-string bag distribution. Also, PDCA appreciates Anthony Sciortino of Equipment Corporation of America (ECA) for finding an opening in his foursome to enable staff to play golf. Finally, PDCA enjoyed the opportunity to join the table with American Equipment & Fabrication, including Charlie Booth, Ben Peel, Bill Wilbur, Joe Gelardi and Pat Griffin during dinner and awards. 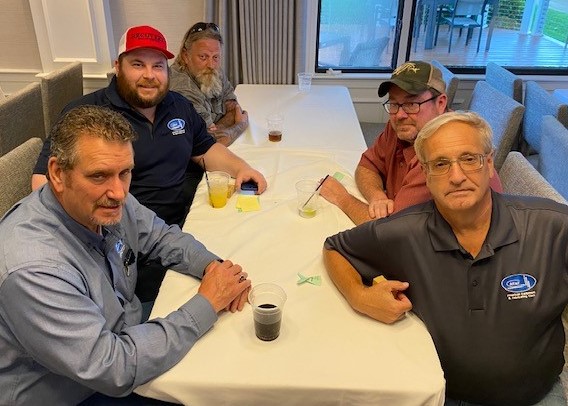 (The team from American Equipment and Fabricating, Corp.) 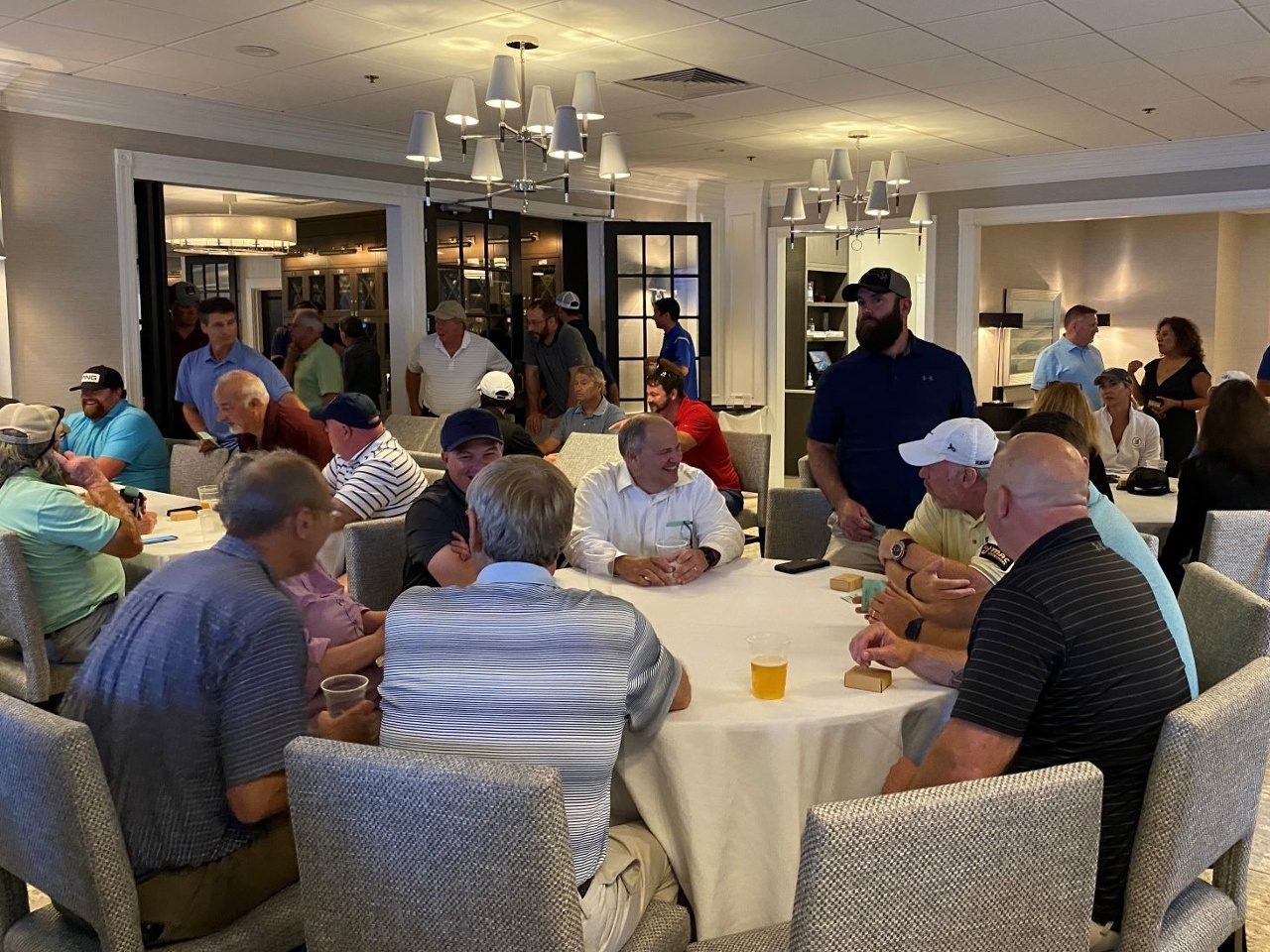