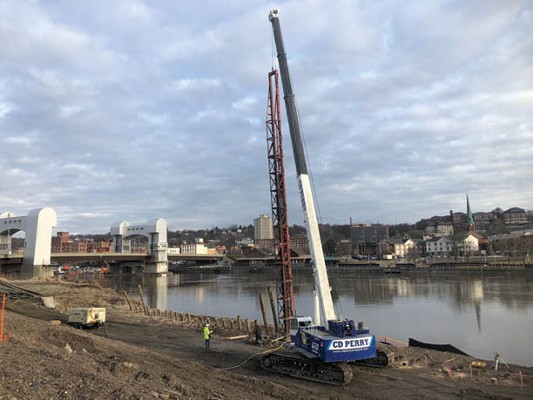 CD Perry of Troy, N.Y., a is a heavy civil, marine and industrial contractor. The company was awarded a contract by Luizzi Brothers of Albany, N.Y., a private developer and site work contractor, to install 525 timber pile in support of the foundation for a seawall built on the face of the island on the shore of the mighty Hudson River. The overall project is a $65-million transformation of an abandoned oil terminal in Green Island, N.Y. to a luxury condominium site including a marina, restaurant and performing arts amphitheater, the latter of which CD Perry was contracted to install the permanent sheeting. The timber piles were installed during the harsh winter conditions in upstate New York using a few classic pieces of machinery: a 1972 Vulcan 1 single acting air hammer powered by a 1979 newly rebuilt Ingersoll/Rand 750 CFM air compressor and combined with a newer 2015 Tadano Mantis 15010 telecrawler. To increase efficiency for driving the piles, the holes were predrilled with a Kobelco SK70 mini excavator equipped with a rotary attachment, which kept ahead of the pile crew. The timber pile phase of the project was completed on time and on budget with the coveted combination of safety and production. The project team included a combination of CD Perry personnel: operations manager Lance Farrell; project manager Dan Espey; assistant project manager Jared Henkel; and crew members Todd Beauharnois, Toby Adair Don Emory and Nicolle Benjamin. Coordination between Luizzi Bros. project team members Chuck Pafundi (project manager) and Brian Gross (superintendent) and Alex Ryberg with GRL Engineers, the testing company, was critical to the project's success. "The project faced some upfront challenges with the winter conditions, as well as the compressed overall schedule being one of the first activities on the critical path of a $65-million project holds a lot of responsibility," said Tyler Fane, general manager at CD Perry. "I'm very proud of our team in their accomplishment of providing satisfaction to yet another project owner, and getting the job done safely and efficiently."